It’s a dream come true for Rutland Pies maker Ian Curtis. After years working as a baker for local and national companies, he is standing in his own pie making premises.

He was just making pies at home when his dream suddenly became a reality. 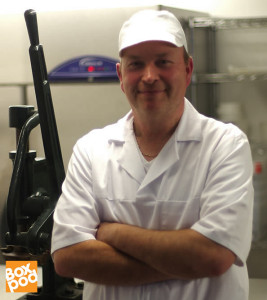 “I was deciding what I wanted to do next. I was doing some decorating and gave the householder one of my pies… He loved it! I told him what I hoped to do and he helped with my business plan and put up the funding. That’s how I got Rutland Pies off the ground.”

With a business plan, sketch of how the premises should look and £45-50k investment, Ian set about finding a unit for Rutland Pies. It had to be near his home and in either Oakham or Uppingham to fulfil his Rutland heritage.

“I had looked around the towns but couldn’t find the right place. Then I spoke to Nick (Boxpod MD) and he found me the unit I’m in now. It just suited our paper plan perfectly. And by being on a small industrial estate I have willing tasters all around!”

“The thing about being your own boss is you have to do everything, sourcing ingredients, buying, negotiating, all the market research. I must have walked miles checking out pie prices in shops, delis and farm shops.”

One year on, seven different pies are in production and Ian aims to make 500-1000 a week depending on demand.

Having seen pies he made with former employers win awards, Ian hopes his own Rutland Pies will achieve local and national recognition. In the future, he wants to extend the product range, (he is always scouring the Internet for recipes), set up mail order sales and employ staff.